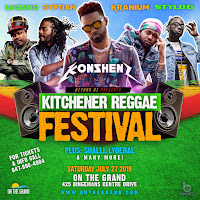 Toronto is known for providing an excellent assortment of Caribbean-based artists during the summer concert season. From soca fetes, to reggae showcases, they are always live artists making appearances on boat rides, at event venues, and special music festivals while the Caribbean audience embraces the summer weather.

On Saturday, July 27 On the Grand presents the first Kitchener Reggae Festival, taking place in Kitchener, Ontario (approximately 100km from Toronto) at the Bingemans Centre (425 Bingemans Centre Drive), as a part of their mini-festival series featuring artists from all genres. At the ReggaeFest, attendees will be entertained by some of Jamaica's favourite recording artists: Konshens, Gyptian, Kranium, Luciano, and Stylo G. In addition to the live artists, the grounds of On The Grand will also feature vendors for a festival environment. The event will begin at 6:00pm, concluding at 11:00pm; this is a licensed all ages show.

Originating from Kingston, Jamaica, Garfield Spence has been recording since 2005 when he performed with his older brother as the duo Sons of Jah. Since then, he has released a long list of hit dancehall tracks, that have resonated internationally and across genres. Songs like "Gal a Bubble" (2012), "Do Sum'n" (2012), "Jiggle" (2013), and "Bruk Off" (2016), have made the music of Konshens a staple in any party or festive environment.

Another reggae artist who has received international acclaim due to his melodies and vibes, Windel Edwards (aka Gyptian) also came on to the reggae recording scene in 2005 with his conscious track "Serious Times," followed by the hit "Hold You" that was beloved worldwide in 2010 and continues to bubble. A VP records artist, he has made an impact with his lyrics and has created a few classics as a result, including "Is There A Place" from 2009.

Kranium (Kemar Donaldson) is known for "his melodic flow, clever word play, and ability to break all barriers when it comes to his music." A native of Montego Bay, he was raised in Queens, New York, which gives him a unique dancehall blend, and opened the doors for collaboration with international musicians like Wiz Kid, Tory Lanez, and Ed Sheeran. Some of his fan favourite songs include "Nobody Has To Know" (2013), "We Can" (2017), and "Last Night" (2018).

A favourite in any Jamaican music discussion, Luciano (Jepther McClymont) has been blessing reggae music since the early 90's, making a bold statement with his 1995 album "Where is the Life" that featured a string of international hits like "It's Me Again Jah," and "Your World and Mine." An ambassador of the conscious reggae music scene, Luciano the Messenjah has many great anthems including "Sweep Over My Soul" (1999), and "Over the Hills" (1996), and "Never Give Up My Pride" (2008).

Young artist Jason McDermott (aka Stylo G) created an anthem that easily framed last year with its memorable intro "Touch Down" featuring Vybz Kartel and Nicki Minaj became an instant classic. Born in Jamaica and raised in England, Stylo G has been involved in the UK underground scene since the age of 15 with a few chart topping songs in Europe like "My Yout," "Leader," and "Swagga Dem." Following in the footsteps of his musician father, dancehall artist Poison Chang, he made his mark as a Grime artist and is known for "developing the bridge between UK hip-hop and dancehall producing tracks."

Toronto singer/songwriter Shalli will also be performing at the Kitchener Reggae Festival. Known for her "soothing voice, complex melodies, and infectious rhythms," Shalli has been singing and creating original music since the age of 5 in a range of environments from church choirs, to gatherings amongst her family of musicians. Shalli's Dominican and Jamaican heritage has contributed to her eclectic music style, and has motivated her travel to the Middle East, Africa, and parts of Southeast Asia to perform and experience culture. Her debut album "Then Now" was released last year.

If you've reached the end of this article, and would like to attend the Kitchener Reggae Festival on Saturday, July 27, please email Kya Publishing at services@kyapublishing.com to see if you are the winner of one of two pair of FREE TICKETS that we have to give away, courtesy of On the Grand and Vocab Communications!