Familiarity feels good, particularly when it is coupled with success and social movement. When the Toronto Raptors won the NBA Championships this past summer, thousands of Torontonians eagerly left their homes to parade and revel downtown and show their pride and appreciation for the hometown basketball team. When tennis professional Bianca Andreescu recently defeated superstar Serena Williams at the U.S. Open, Canadians from coast to coast expressed their joy, despite rallying behind Serena’s career for decades. From sports to music, film, politics, or science, whenever one of our own excels on a public stage, we all hold our heads a little higher. It’s only natural.

There is something pure and relatable about working hard and then eventually seeing the results. We are inspired when we see efforts rewarded, because it reminds us of our own abilities and that every goal and dream once started as a mere thought, idea, or humble hope. We enjoy watching the fruits of hard work, because we ourselves are working hard for something. In some way.

Whether the accolades are received on a Canadian level, on a Toronto level, or on a municipal level, it is wonderful to see communities form in celebration and common passion. We’ve witnessed it time and time again in sadness and in joy: a variety of cultures, ages, and backgrounds unifying based on a common experience of community. In the eastern Toronto community of Scarborough, this month, there is plenty to celebrate and it includes the history of some of the town’s most influential residents and citizens of nearby towns. It also involves one of the city’s favourite shared annual events. 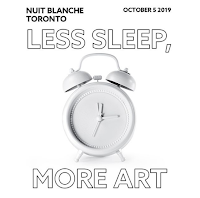 Nuit Blanche—Toronto’s all-night free art exhibition—takes place this year from sunset (7:00 p.m.) on Saturday, October 5 through to sunrise (7:00 a.m.) on Sunday, October 6 in a range of indoor and outdoor locations around the city. This year, Scarborough will be activating more installations than anywhere else in the city.

Artist Mark Stoddart, a Scarborough native, has joined creative forces with Ashley McKenzie-Barnes and her Queens and Kings of Scarborough exhibit curated for Nuit Blanche this year. 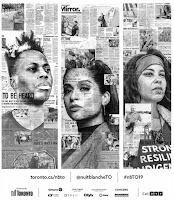 “This theatrical playground will challenge systems of social marginalization, self-identity negotiation, and racial stereotyping within a modern framework. From film and installation to interactive sculpture and street art, Queens and Kings of Scarborough will honour this community as a hotbed of culture,” said a Nuit Blanche release.

As a part of the Nuit Blanche display that will expand across Scarborough Town Centre and nearby locations within walking distance, Stoddart’s contribution—ReConnected—will be a featured element of the Queens and Kings of Scarborough installation. 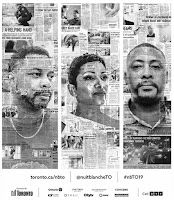 “[ReConnected] is a chance for young inspiring artists and athletes to realize that they have individuals who were raised within their communities who have excelled despite various obstacles that may have been in their way,” said Stoddart. “It’s a chance for a community to re-establish a bond of communication and emotional connection. A time to truly reflect on the success and accomplishments of our own, while thinking of the next wave of rising stars to make a difference within our communities.”

ReConnected will highlight 19 individuals from Scarborough and its surrounding districts, who have contributed to hometown pride in a variety of ways. Their images will be coupled with an assortment of published articles and archival photos from the Scarborough Mirror newspaper, 5” x 20” pieces accompanied by a 15-minute video story.

The celebrated Scarborough figures include:

The names are being honoured in Scarborough for Nuit Blanche because of their unique connections to the town. They are individuals that lived on the same streets, attended the same schools, played at the same parks, and developed in the same neighbourhoods as the current residents of the eastern Toronto borough. Residents know their relatives, have seen them on the TTC, or encountered them over the years at events and local businesses. They represent the community well, because they are of the community. They are Scarborough.

The ReConnected exhibit is a spinoff of a former exhibit from Stoddart entitled “Voices of the Past,” which highlighted civil rights activists, also through uniquely combining images and newsprint.  Through , Stoddart will show appreciation for the efforts and individual legacies. It will be on display at the Scarborough Town Centre’s Entrance 4, in the passageway joining the mall to the TTC/RT entrance. The indoor exhibit is free to the public, family friendly, and fully accessible. It will serve as a meeting ground for Scarborough locals, and visiting admirers. It will help to reestablish connections, educate visitors, and celebrate the achievements of those on display.

As a visual storyteller, Stoddart has dedicated his career to communicating truth to power. His passion for music, sports, and activism have been important tools towards his mission of educating, empowering, and uniting audiences. Born in 1968, the powerful history of the year’s significance has framed his outlook, designs, and social contributions. He has taken a childhood love of collecting t-shirts and expanded it into a clothing and apparel line. He has partnered with historical Black figures like Dr. John Carlos who in 1968, as an Olympic sprinter, silently protested with a raised first on the Mexico City podium during the medal ceremony. Stoddart has deliberately built collections featuring jazz icons and other cultural leaders—his work is rooted in social integrity and powered by the intent of his ancestors.

“Mark is looking towards the future with a passion for an artistic medium that motivates and expands the imagination. As a visual communicator, he feels compelled to do more than just convey information—it has become his personal mission to create art that inspires people to act.”

Stoddart’s latest project ReConnected, in the spirit of his previous artistic presentations, will continue to inspire, to teach, and to provide insights and ideas to his audience. A focal point of the Scarborough experience, by highlighting these individuals Stoddart is reminding NuitBlanche patrons of the creative forces and unique souls that Scarborough and its surrounding Toronto communities has produced. His pride is visible and will be transferable to all who take part in this weekend’s Queens and Kings of Scarborough exhibit. It is his hope that through the familiar faces and stories, another generation of leaders will be nurtured on the same Scarborough streets that Stoddart himself used to navigate, internalizing the positive and progressive inspirations of his environment.

Posted by Stacey Marie Robinson at 11:38 AM No comments: