Kanye West IS a Genius. I Swear. 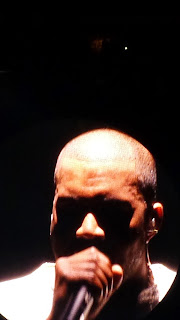 He's nuts! Kanye West is absolutely nuts, and I swear that's why I like the brother.

Last night I attended the last stop on his Yeezus tour, at the Air Canada Centre in Toronto, and I am still on a bit of a musical high. It was a two and a half hour show...just Kanye. Kendrick was about 45 minutes on his own from 7:30pm to 8:15ish...and Kanye rocked the stage from 9:00pm straight to like 11:30pm. Madness.

I admit...when I first listened to the Yeezus album I was hella confused (see previous blog http://www.staceymarierobinson.blogspot.ca/2013/07/yeezus-kanye-west-huh.html). I didn't get it. I didn't like it. I bought the album as a dedicated fan...but as a music lover, I wasn't impressed.

Put in the appropriate context, with a bit of breathing room and media referencing, it all made perfect sense. I read articles, and I think it was his interview on the Breakfast Club (Power 105.1) that made me kinda "get" Kanye just a little bit more, at this particular stage in his career.

I am a huge Kanye fan, so I will always give him the benefit of the doubt, based on his previous projects and musical talent alone. I love his past production (don't we all?), and he's obviously got hits on top of hits that still make us smile.

I was disappointed with the initial cancellation of the November 13 concert in Toronto, but glad I didn't give in and refund my tickets, and stuck around for the rescheduled show on December 23. The ice storm and blackouts didn't keep anyone away...the house was full. Both nights, apparently.

Kendrick Lamar opened, and was fab. I'm new to his music but definitely can appreciate his talent and most importantly, his intellect. There's something about his music that reminds me of a time when I used to really love and appreciate hip hop...mid 90s when the music FELT good. Kendrick reminds me of that period in musical time. I actually appreciate his lyrics, which is more than I can say the many of the other rappers that I love and enjoy...but don't necessarily respect as much. 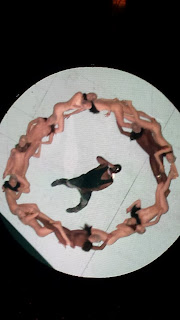 But Kanye took to the show to another level. The set design alone was spectacular, the snowy mountain, accompanied by the essence-of-naked female backup "dancers"/walkers...the much talked about digital screen (that was damaged mid-tour, causing the postponed dates), and then there were the masks.

The damn masks. It took about two hours for Kanye to take off his masks, but when he finally revealed his face the place turnt up!!!

It was a musical journey. Again, I wasn't as familiar with the album as the tens of thousands of teenagers and young adults filling up the venue (truuuust me, I'm pretty sure we were among the oldest people there)! But the music was the perfect accompaniment to the story being told. The quotations on the screen. The smoke. The eerie-ness. The solemn faces of the women (behind nylon masks), and Kanye rapping from behind his own jeweled face-covers.

I'm too lazy to try to pinpoint and analyze exactly what his artistic vision was. It is not that serious. I'm sure there was a deeper message about God, and spirituality, and image, and the soul, and going on a journey...blah blah blah. I'll read all about it on the internet later on (thanks to the non-lazy bloggers who I'm sure have already gone to great lengths to dissect this man), and I'm sure I'll appreciate the show even more when I've fully taken in the concepts. 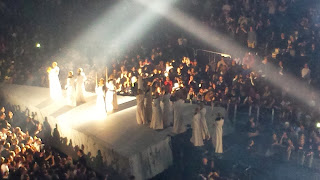 But on a surface level, it was a very spiritual show. It felt spiritual...and it felt sacrilegious all in one. There were moments when the lady-dancer/walkers hoisted Kanye in the air to his chants of "I Am A God"...and then there was the moment when Jesus appeared (and Kanye was all, "Hi, White Jesus!") and so many crosses, and angels, and demons, and all kinds of Christian religious imagery going on. If I was the easily-offended type, I would have surely been offended.

I'm sure there are plenty Christians out there who think Kanye crossed the line. Buuuut, I'll give him the artistic pass and work with it. I'm sure the Illuminati conspiracy theorists are having a field day with this one as well.

So there was Kanye-lifting and crosses waving, Kanye's face covered in various beaded masks, and Kanye laying on the ground, and the whole time I couldn't help but think: there is no other rapper that would do this, except for Kanye. Kendrick came out and rapped, just as Jay-Z and them usually do...same shit. They come out, they rap, they talk a bit, they dance a bit, and they keep it moving.

This is what makes me realize that yes, Kanye is a musical genius. Yes, he shouldn't be the one to remind us of this (constantly), but the brother has a point. He is definitely pushing boundaries, and breaking barriers, and experimenting with sounds, and images, and ideas, and he is definitely a bit of a musical mastermind.

If his music was horrible, I wouldn't give him the honour. But because he has consistently come out with great tracks, and great concepts, and fabulous albums, and cutting-edge music videos and interpretations of his music...I'll work with it.

He kept talking about 2014, and 2024 in his obligatory Kanye-concert-rant. This particular rant wasn't very YouTube-worthy (and I did step away for a bathroom break for a bit of it), but I realize his vision. He keeps telling us to be patient, and to trust his vision...I see what he means. I understand that in 2013, listening to him rant about Nike and the Grammy's, and whatever's on his mind seems annoying and irrelevant. He said he won't have any more negative things to say in 2014.

I truly do believe that history will tell the story better. When we look back, he will definitely be iconic in the sense that he was doing something and saying something that many artists weren't bothering with.

One particularly annoying concert-heckler kept yelling at Kanye to "shut up and play the music" but I believe that his ranting, and his arrogant, and his craziness is all a part of the packaging that makes this man interesting. Of course he knows he's being irritating...how can he not know?! Of course he knows that he may be perceived like a lunatic...but the fact that he's willing to take that risk makes me like him event more. 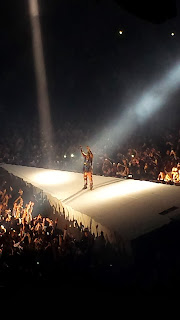 He is so arrogant that he doesn't even care that in his arrogant he looks like a fool. He's so foolish that you can't help but almost love him because it's borderline endearing. I like the brother, I really do.

So the album, in the context of the concert, really grew on me. I dusted it off and listened to its this morning, and the memory of the concert visual, and the new storyline I can add to the musical journey...the album has new life for me. And not just Bound 2, and Blood on the Leaves. It's all sounding all right to me.

I appreciate his creative energy, and the team he put together. I've been to a LOOOOOOOOOOOOOOT of concerts. I've seen damn near everyone live, but this actually ranks in my top 5 (amongst Prince, Janet Jackson, and even Michael Jackson)...and I don't say it often, but there was a point in the night where I nodded my head and said, now this is a motherf*ckin SHOW! 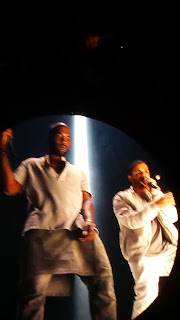 And boy was I happy to see ol Drake come out, and perform alongside his idol, and also perform his new hit "All Me". That was Toronto wonderfulness personified. The crowd was soo turnt up.

It was the climax of the night, and also helped the now unveiled Kanye get back in the right old "hop hop" zone (no angels or demons around) and give us the classics like "All of the Lights" and "Stronger" and the songs I actually knew the words to. Songs with melodies, you know.

So God bless Kanye, in all his ridiculousness. His vision is misunderstood, but I believe time will tell the true story. And even if he's just a publicity addict (like his fiancé Kim) and really misguided in his efforts to have everyone love him (as he declared a few times)...I will have still appreciated watching the spectacle of Mr. West as he navigates the music industry, and does a hell of a job keeping me captivated.

I live for this stuff. I swear. Fabulousness. And sooo much fun!