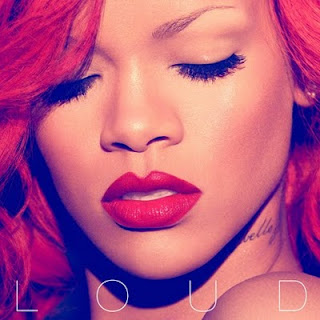 She's definitely talented. Beautiful. Interesting. Even if her music and image isn't your style or taste, you can't deny that she is undoubtedly a star.

For the past 5 years she has been consecutively knocking out hits pon toppa hits, yet it wasn't until her fifth studio release "Loud" came out that I actually had the motivation to purchase one of her albums.

I'm a strong believer in supporting the cause. If I want to see a movie, I'd rather go to the theatre than buy it bootleg. If I love an artist and feel like their album will inspire me, I'd rather own the entire album than beg a burn/download off someone else. I definitely prefer to buy a book than borrow one from the library.

Call me old fashioned, but I believe in the art form, and I appreciate a tangible product received as it was intended. The overall experience is different for me when I know that I own the product. It gives it additional value, even if only in my head.

Canadian communication theorist Marshall McLuhan said it best when he declared that the "medium is the message" -- the manner in which the message is presented is acutely related to what is being communicated. 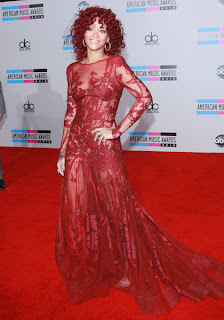 Hense, going out in the cold to cop this CD.

For the first time in 5 years, I actually believed in Rihanna's message.

I've liked her other stuff. "Pon De Replay" I thought was lame and hardly the reggae song it attempted to be as her introduction, but other greats like "Break It Off" (with Sean Paul), "Don't Stop The Music," "Unfaithful," and of course "Umbrella" were definitely hot tracks. Also worth mentioning, "Numba 1 (The Tide Is High)" from Kardinal Offishall's "Not 4 Sale" album -- great tune. "Live Your Life" with T.I. = fire. "Run This Town" with Jay-Z and Kanye...fantastic!

With that many songs on the charts though, who could really keep track of what album was what? The songs just kept coming out, and it got to the point where I just expected that her releases would be great. She has set an incredibly high standard for her career, and she has easily maintained it.

Ms. Fenty is only 22, but is argueably the hottest pop star there is right now. She's already in the ranks of Beyonce, Mariah, and Lady Gaga, when it comes to producing chart-topping sh*t and great videos, regularly. 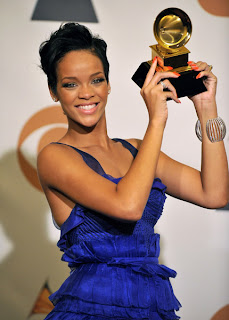 She's won a total of 53 awards already in the span of her short career including 4 American Music Awards, 14 Billboard Awards, 3 Grammy's, 3 Much Music Video Awards, and even a Juno (international album of the year).

This particular album was pretty good. Not groundbreaking or exceptionally phenomenal, but it's a good listen that you can have on repeat a few times over without getting annoyed. The sounds and vibes are consistent, yet diverse enough that it's not just hearing the "umbrella-ella-ella-ella" yodle in your ear for an hour. Her tone changes, the intensity changes; it's a nice mix:

Can she keep this momentum? Where will she go from here? How many more hair styles can the chick think of to stay fresh and trendy? Who knows! But right now, I'd say she's at the height of her career, and I'm happy for her. The improvement, the growth, and watching her come into herself reminds me of the artistic journey, and the manner in which talent can expand, change shape, and develop. 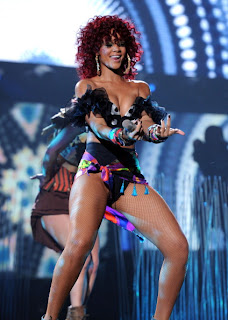 So why now? Why am I finally learning her story, and interested in who this girl is? It was all inspired by her performance on the American Music Awards this past Sunday, November 21, 2010. I've seen her perform a million times, but this is the first time I actually believed her as an artist. She seemed happy. She seemed authentic. She danced her butt off. She smiled. She was in a groove, and I actually felt like this was the artist she has been preparing to be. There was a new vibrance to her, and it made all the difference in my perception of her.

I love to see people out-do themselves and exceed their own boundaries...I love knowing that everyone starts out as an average individual with a dream, a goal, and the motivation to do something about it.

Therein lies my inspiration from this album and Rihanna's journey. Because somewhere out there on the French Riviera, on a yacht with Matt Kemp, the little Bajan girl Robyn feels really proud of herself for seeing her vision through to the end.

In case you missed it, here's a clip of Rihanna's performance on the 2010 American Music Awards show where she wined like she was at Cropover, and inspired a standing ovation from the crowd of her industry peers. 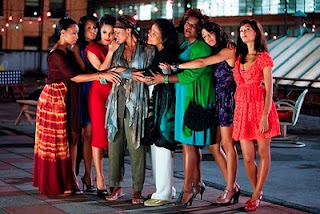 What a phenomenal movie!
At the risk of ruining the viewing experience for anyone who hasn't yet seen the film, I won't even get into the particulars of why I loved Tyler Perry's "For Colored Girls." But I will say this...I love Tyler Perry.
I love his vision. I love his voice. I love him like I've loved Spike Lee, and John Singleton...and Terry McMillan, Sister Souljah, and Omar Tyree.
I love when artists are able to take a story based on real-life emotion and circumstance, paired with social awareness, and old-fashioned entertainment...and create a masterpiece. 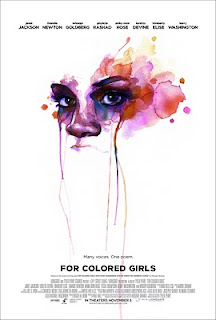 I love that just a few days before the relase of his movie, Tyler Perry sat on Oprah Winfrey's couch and told millions of people about his experiences with abuse, and molestation. I love that a week later, Oprah filled her audience with 200 men who had been through similar experiences with betrayal and abuse.

It's more than just entertainment, as far as I'm concerned. On the surface it's just show business, it's one man's vision being translated on the big screen. But to those of us who were touched by Singleton's "Boyz in the Hood" or Lee's "He Got Game" or any other movie with an ensemble black cast...we know the power behind the production. We know the "real life" story from which the inspiration came. We know the meaning this "entertainment" has in our real lives. We trust the storytellers, because we know their experiences.

It was so wonderful to see all of those beautiful and talented black actresses all highlighted together: Lorette Devine, Thandie Newton, Anika Noni Rose, Kerry Washington, Kimberley Elise, Tessa Thompson, Phylicia Rashad, Whoopi Goldberg, and Macy Gray. It was bittersweet because it was so wonderful...yet so rare. 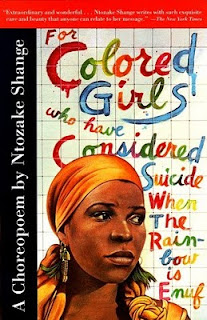 The movie is based on the 1975 play by Ntozake Shange, entitled "For Colored Girls Who Have Considered Suicide When the Rainbow is Enuf." This has also been adapted into a book.

It's amazing that many of the mainstream reviews of this film, have not been great. Even more amazing...if you ask a friend or coworker who's already seen it, chances are they cried, they laughed, they think it's Perry's best work yet, and they would give it nothing less than full ratings.

You don't realize how much you CRAVE a representation of yourself in the "bigger picture," even if just a visual reminder, until you see it. You don't realize how FEW black women there are in motion pictures...until you FEEL what it's like to see more than 2 of them occupy the same screen.

The best part is that the "black" movie has evolved far beyond the hood tales or tacky comedies/parodies. It's nice to see that black filmmaking continues to grow, and be more inclusive, and more elegant, to the point where the "blackness" of it is just a minor detail. 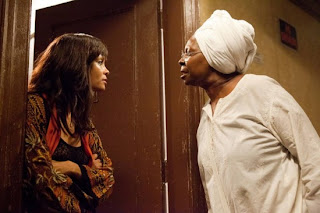 "For Colored Girls" wasn't just a movie for colored girls. I believe any woman of any race could find herself immersed in the characters and their struggles, and as a woman...naturally find a way to relate to their pain, their growth, and their eventual personal successes.
As for the men...I'm not sure if they're going to walk away from this movie glowing and inspired, like the females have been. The few male characters in the movie, are at best...not nice people. Understanding their role in the stories of the women, it's totally necessary...but the acting was still outstanding.
So here's to the beautiful brothers, who admittedly may have gotten a bad rap throughout this film: Michael Ealy, Omari Hardwick, Richard Lawson, Khalil Kain, and Hill Harper.
What can I say? It's nice to see a good movie that makes you walk away thinking and feeling...a movie that makes you want to better yourself, and uplift those around you. If that's not the goal of entertainment/media, I don't know is. And if that's not the usual output or end result...then maybe we haven't been exposed to the right type of material. 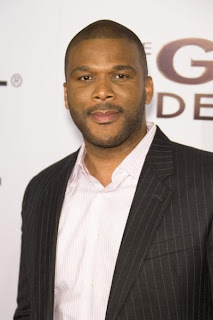 I am a huge fan of entertainment, the media, and those who play a role in constructing it. Congratulations to Tyler Perry for hustling and writing religiously, putting out film after film after film, and now settling into the role of one of Hollywood's best.
Both his personal story, and his fictional story, will be touching millions over the next few weeks. I expect to see a few Oscar nominations, at the very least. And if the recognition still doesn't come from mainstream Hollywood, I will still be pleased knowing that women everywhere are feeling uplifted as a result of his work.

Posted by Stacey Marie Robinson at 8:12 AM 2 comments: