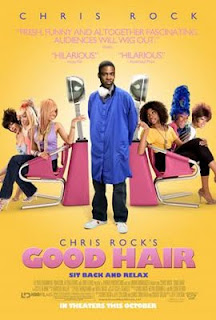 I went to check out Chris Rock's "Good Hair" this weekend, slightly disappointed that in the entire city of Toronto and it's surrounding areas, there were only 2 theatres playing this film. Nonethless, I went to one of the locations and had a good time.

I love Chris Rock, and think he's a hilarious comedian who always has brilliant social commentary...BUT, I must admit that I was expecting him to get deeper on the subject of "black" hair and the mental and social affect it has had on black women in particular.

Don't get me wrong, he did cover all the basics. He went from LA, to Atlanta, to India to engage in honest discussion with a variety of people. The subject was touched on, however the element of humour and the vast ground to cover made it difficult to discuss each area in any great detail.

He took viewers to the men in the barbershop where we heard them talk about the difficulties in not being able to touch their black woman's head/hair, or participate in particular activities (swimming, steam rooms, etc.) with them.

He went backstage at the notorious Bronner Bros. International Hair Show in Atlanta, where hairdressers from across America dramatically competed for top accolades in their field. 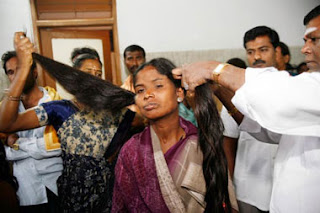 Chris travelled to India to witness the sacrifice that thousands regularly make, choosing to walk around bald, while giving their hair to God. Then we saw a salesman travel from India, bringing packages of the sacrificed hair (10"-14" preferred!) to America where he hustled his goods for thousands for dollars.

What particularly resonated with me was when Chris decided to try and sell "African" hair to a shop owner in America, where the Asian male worker and Black female worker quickly declared that no one would buy Chris's "African" hair. The more "natural" look was in, they said.

Which leads to the question...natural for who?

Chris touches on how a black woman's hair is her crown and glory. Different women require a different look to make them feel good about themselves. Celebrities like Raven Symone, Melyssa Ford, Meagan Goode, Nia Long, and Eve proudly discussed their weaves and the money they spent to ensure their hair looked good. Hearing these opinion leaders in the black community embrace this, and disregard the natural beauty of their hair (underneath) was slightly disappointing to me. It was almost shrugged off like, it is what it is, and we don't mind.

Chris's conclusion, and perhaps the conclusion we all inevitably come to, is that it's a woman's perogative what she wants to do with her hair. Whether she wants to braid it, lock it, keep it natural, relax it, or weave it...it's really and truly a decision that she has to make for herself. And of course, realizing that the true happiness won't come from the outward appearance, but the quality of her character.

To each her own! As long as she knows that when the hair/hairdresser is unavailable, or she's caught off guard in her natural state...that she still feels beautiful with what God has given her.
Posted by Stacey Marie Robinson at 10:50 AM 2 comments: