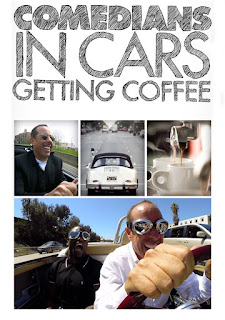 I'm pretty "new" to Netflix, and don't really have any shows that I'm committed to online. As a result, I watch random specials, and documentaries...occasionally binge on old sitcoms (just finished a ten-season Friends recap last month, for example)...but I didn't realize that Jerry Seinfeld's "Comedians in Cars Getting Coffee" has existed since 2012? What a wonderful, refreshing, and a brilliant exercise in everyday hilarity! Thanks (yet again) Netflix!

I've been watching a lot of Kevin Hart, Trevor Noah, and Dave Chappelle these days, so naturally Netflix suggested I view a few other things they thought I'd like, and yet would never discover on my own. And they were right. This show is really funny, and I think I have a NEW, new appreciation for comedians right now. Especially looking back over decades of life, and realizing just how present they were during various eras, and how they are responsible for so many smiles, so much laughter, and just good memories overall.

Jim Carrey, in the first episode of the latest season made a great comment about his life. He said that just knowing that when he shows up places, or when people see his face, their immediate reaction is joy and/or laughter. He feels good knowing that in his life, he has managed to make an impact that just makes people happy when they see him. End of story. 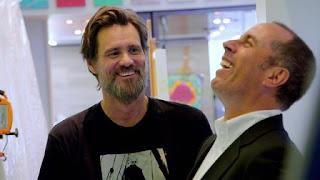 That's the point of entertainment, needless to say. To bring us away from reality, or introduce us to new realities...to escape, without escaping. And through the most basic form of entertainment...soliciting laughter through jokes. I think pop culture goes through eras where comedy is either really on...or really off. Given the wacky state of political affairs, and other fuckups...comedy is like a necessity right now.

The show, although moving along just fine for the past 5 years...couldn't have come at a better time for me, personally. I imagine that it's move to Netflix is a welcome addition for other entertainment lovers as well. I mean, clearly, an unscripted segment with two professional jokesters is bound to make you laugh at some point?! But what I'm also loving, in addition to the laughs, is the insight that these folks are providing along the way. I'm sure this was 100% the point, when Jerry Seinfeld conceptualized this show. The other side of comedian's minds...how they interact with one another.

The premise itself is funny, because we're expecting them to both be "on"...and in some cases they are, and it manifests many brilliant, honest moments of joy. In some cases it's forced, but still insightful. In the best episodes, Jerry himself can't stop the tears of laughter from falling, and there is absolutely wonderfulness in just watching THAT go down. 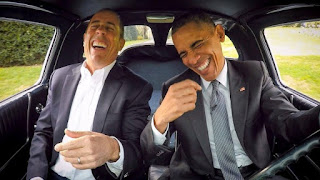 Made me think about a few things, overall...and the first was Robin Williams. The most animated of all comedians, with so much of the most unbearable pain. Watching the comedians interact with one another, you can see the personality type more clearly, the eccentricities and intelligence. The commonality I'm noticing with these discussions (and even with stand-up, as of late) is how intrinsically connected these artists are to the world. To human nature. So connected mentally, yet so often disconnected emotionally. They proclaim to be introverts, and socially awkward. They say that they are outcasts, when our entire lives we know them to be the life of any digital party. The paradoxes are fascinating. 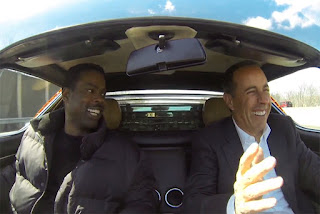 It's like musicians: many of them are gone too soon, and we never get to see them mature, or grow wise, or old because of this unbearable uncomfortableness. And then some of them, we get to see the full arch of their lives. The beginning, the peak of their careers, the disappearance, public issues, and resurrection...we get to see the end result of their craft. We see many flourish, and stay grounded. They beat the fame game, and live prosperous lives! Some of them, we're living right beside them...coming of age, falling in love...we are similar in life stages, yet watch them life under their permanent spotlight, performing for us.

One of the things I am enjoying the most about this series--as I easily blaze through new episodes and old--is how many of the comedians we get to reconnect with, later on in life. Even if that later on is just a few months, or a few years...it's nice to be made acquaintance with Stephen Colbert, and Dave Letterman, and I even actually enjoyed Jim Carrey...probably moreso than I did during the height of his career. Go figure.

Some of the comedians were unexpectedly demure, almost. Introspective. It was great to not see them "on"...and just listen to their thoughts and perspectives on life, and their careers. For someone trained in the art of seeing the funny in life, it's amazing to hear what happens...after the funny. When they're not obligated to pretend, but can now freely speak their truths without the confines of their television shows/film careers. 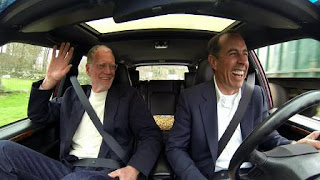 This is what is going to catapult people like Dave Chappelle and Dave Letterman to another public level, I believe (the honesty, and lack of restriction/regulation), and I think what streaming channels and new entertainment-viewing mediums will bring to pop culture in the next few years. A rawness, and genuine truth that we all desperately need to progress, collectively. With faces and voices we've already grown to trust, admire, and love for how they have already injected laughter into our lives.

P.S. The cars, pretty dope too!

Posted by Stacey Marie Robinson at 12:24 PM No comments: 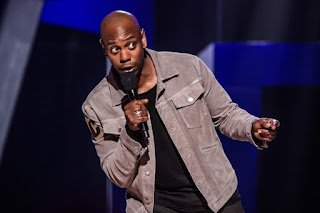 Thank you, Netflix! Having TWO new Dave Chappelle stand up comedy specials to watch and bring in the new year was an excellent, excellent idea! "Equanimity" and "The Bird Revelations" were everything I wanted them to be...and more. Dave Chappelle is wonderfully brilliant in both, and I appreciate him on new levels as a result.

His voice, his perspectives, his sense of humour, his honesty, and of course his amazing comedic timing and creativity make him my favourite comedian of all times. I love and appreciate a lot of them. Bill Cosby (yes, still) and Eddie Murphy for what they represented in my childhood. Chris Rock, Martin Lawrence, and the Wayans brothers for what they were to our generation growing up, and of course Kevin Hart and Dave for their relevance right now. Their commentary, right now.

I so appreciated the rawness of these latest specials. Like many, I was obsessed with Chappelle's Show in the early 2000's and have watched those DVDs repeatedly over the past decade. The jokes are still funny. The characters still make me laugh, and the sketches will go down in comedy history for their cleverness...and foolishness.

While the television show was beyond classic, what I love now is to see Chappelle post-Comedy Central. Post-speculation. Post-disappearance. He's always been around, and doing regular appearances at comedy clubs and intimate venues across the continent. A true comedian, of course he couldn't just stop cold turkey like that. But as we now understand, he just went low key for a bit. He came off the radar for a bit.

I respect the fact that he hasn't given into the standards of fame that most of us are used to accessing: social media. Politically correct perspectives. Personal life exploitation. The list of reasons why I admire this man are quite opposite from the reasons why I might appreciate some others. For example, I appreciate how Kevin Hart has been forthcoming and transparent about his life, because the lessons and stories are awesome and inspiring. But Chappelle's journey has been different. Quieter. Yet still, quite powerful. 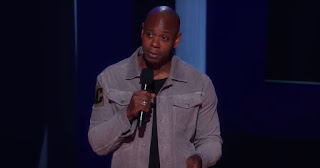 The first two Netflix specials earlier this year were a relief: he was BACK! He was public, he was mainstream, he was on SNL, and ready to take on the world. Those specials were a blessing to Chappelle lovers everywhere. But these two...they're other level.

It has all the expectations of a traditional Chappelle stand up routine, but what I feel is the wisdom. The introspection, and the social responsibility are much, much clearer now. He's still silly, and he's still got a unique style of jokes...but then without notice, he can dig deep, switch the mood, and get right to the heart of many issues. No laughter necessary.

Transgender. Race. Trump. Poverty. Sexual misconduct. There wasn't a touchy topic that he didn't cover, that I wasn't super excited to hear his perspectives. As a serial news-and-entertainment watcher, and someone who is tuned into pop culture and political journalism 24/7, it was literally a blessing to hear this man's thoughts on the past year.

He's brilliant, to put it simply. I love the way his mind works, from the immaturity to the extreme global consciousness. He's brilliant. And I believe he is brilliant, because he is seeing the world as it it...and isn't afraid to provide his analysis to those of us who haven't been exposed to the same shit he's seen.

Fame, power, money, and celebrity are "privileges" that few are given, and even fewer are willing to be so incredibly transparent about. It's beyond interesting to hear someone who can speak on the realities of the glitz and glamour that we consume through media/social media...and to hear new philosophies on "how" and "why" of the business.

While "Equanimity" was more of a traditional stand up special in aesthetic and pace, "The Bird Revelations" was more of an intimate conversation, with a smaller audience and a sober tone. Touchier topics. Less laughter, but more processing of information. 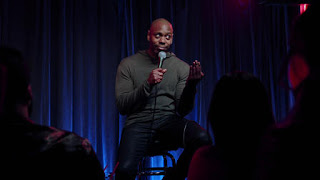 I'll be watching both specials again, and again. I love the way they made me feel, mentally. I love to watch the career of this man expand, and reach new levels of intellect and soul. He's powerful. And will continue to be powerful, if he keeps moving strategically this way.

Most importantly, I loved the reminder that there are dozens of people that we grew up watching as "entertainers"...athletes, comedians, and musicians...who came in with one talent, and have evolved into powerful representations of our culture, our thoughts, and our aspirations. We are watching them grow, and seeing their power and influence multiply as well. It's liberating.

Despite the social injustices covered extremely blatantly by Chappelle in this special, and the realities of race, sex, political, historical, and economic circumstances that continue to make life a challenging course to navigate for some...there was hope within his messages. Hope that with time comes understanding. And with understanding comes recognition, and action, and eventually change. 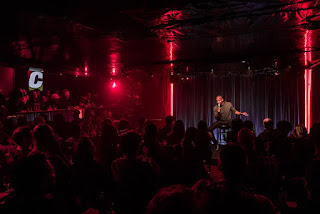 Shit felt really, really discouraging at times during 2017...from a media lens, and a political/global lens. Things felt off, like mankind was suffering through not only natural disasters but also social disasters on a daily basis. In extreme. The year felt like it was sinking into the depths of despair...but there is still an element of hope, as he expresses via the infinite audience of Netflix. Hope that things can only get better. That awareness and sadly, the unfortunate actions of many, will still somehow bring about change.

I appreciate voices like Mr. Chappelle on so many levels. He's saying things that need to be said, inappropriate or not, and he's opening our eyes. He's making his platform more than just an entertaining one...he's making it a necessary one. I'm grateful for his ability to influence. I'm happy to see his career circle back with a force that no one or no thing can stop going forward. I love what he represents to US...as a generation.

He's someone to be admired. And not for the fame and money, but for the effort he puts in to understanding the world, assessing his place in it, and communicating his lessons publicly. I commend his social responsibility, and look forward to seeing where he goes next.