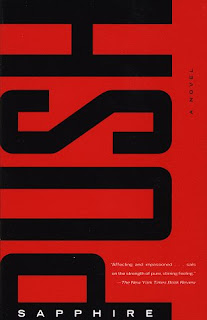 I received the book "Push" by Sapphire earlier today as a Christmas gift...and finished it in one sitting. It was excellent.

This was a pleasant surprise, after a traumatic viewing of the movie "Precious" (based on the novel) last week.

[Read my review of "Precious" here.]

I stand by my previous opinion and still am not a fan of the movie but I must say, I feel redeemed having read the original text.

The book was more about the journey of Precious striving towards literacy, and was written in her broken English and limited vocabulary that expanded and strenghtened as the book progressed. You really got a feel for her growth with language.

While the movie placed too much emphasis on her evil mother, the verbal abuse, and the other negative experiences she had to endure, the book mentioned these elements, but also followed through by showing how Precious planned to overcome these obstacles.

Despite her poor communication skills, short temper, abusive history, and lack of love and guidance, there was an overwhelming sense of hope and perseverance in the inner-monologue of Precious. While she had every reason not to succeed, it was reassuring to know that she increasingly began to value herself, and understood the weight of an education and her own self-worth.

My intepretation of this novel was tainted by the screenplay version, but I'm glad I had the mental reference of the great casting in the movie to highlight what I was reading. I'm glad I got to read about what happened to Precious "after." I appreciate the way in which the author Sapphire took an ugly situation, and made it beautiful.

I now totally understand the power of this story.


My novels the Urban Toronto Tales tell the stories of life, love and relationships in the city of Toronto. For more information, please visit http://www.staceymarierobinson.com.
Posted by Stacey Marie Robinson at 10:32 PM 1 comment:

Review: "Precious" (the feel-bad movie of the year) 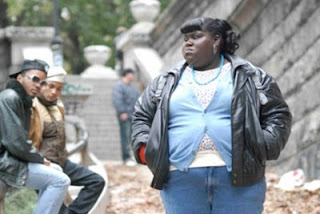 I saw this movie last night, and I'm concerned.
I fell for the media hype back in September. I went downtown for the Toronto International Film Festival red carpet to celebrate the screening of "Precious" and catch a glimpse of my favourites: Oprah Winfrey, Tyler Perry, Mariah Carey, Mary J. Blige, Sherri Shepard, Paula Patton, and the accompanying fanfare. I believed in the power of this movie, the strength of this story (based on reviews of the novel "Push") and I was ready to be impressed. 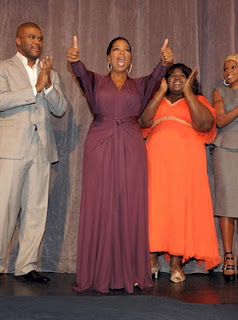 But sadly, you really just can't take Oprah's word on everything...
This movie was disappointing. Disturbing. It got under my skin, and failed at becoming the wonderful film I wished it to be.
For those who have suffered experiences of abuse, my sympathy is genuine, and my heart really goes out to the pain and difficulties that must be endured in an attempt to overcome that. I also understand that Ms. Winfrey and Mr. Perry, as victims of molestation, really felt that the story of Clareece "Precious" Jones really needed to be shared.
Yes, some stories are important for audiences to see and understand. Yes, it's important that not every movie is a fairy tale, and that reality is portrayed to the fullest. But damn. I couldn't blame the people in front of me at the theatre that walked out about 30 minutes into it. It was TOUGH to watch Mo'Nique's character cuss and beat and demean her daughter. It was tough to hear the internal defeated dialogue of the main character, played by Gabby Sidibe.
The most awful thing to see was the violence/ignorance towards the babies!!!!!!!!!! Who does that?
I braved an intense crowd of overbearing fans and grown men paparazzi to get this photo of Mary J. at the TIFF screening of "Precious" at Roy Thompson Hall. 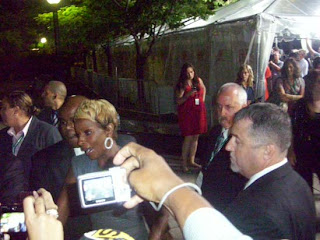 Maybe I'm biased. When I go to a movie, I want to feel good about life, about the characters, and walk away having had an uplifting/ optimistic/ thought-provoking or at the very least an exciting/ adventure-filled experience. But instead, I literally sat in my seat for a good 5 minutes after the movie ended wondering..."huh?" and still shivering from the disturbing imagery.
That's it...? What happens next...? THIS is the movie Oprah and Tyler just had to jump on board with? I wish the movie started where it ended...the build up was uncomfortable, and when you finally had a moment of redemption...end scene. Roll credits.
I'm not convinced it was worth the anticipation. 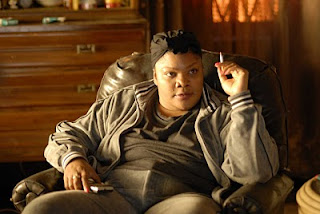 But what I DO know is that Mo'Nique and Gabby definitely deserve nominations for their roles in this movie: the acting was fantastic!! Mariah Carey and Sherri Sheppard were pretty good too. They were all raw, they were physically exposed to the worst interpretation of their naturally beautiful selves, and they made you really FEEL what was going on.
Despite those highlights, I'm not even sure I would recommend this movie to anyone else, but I do know that I'm going to finally read the novel on which it was based ("Push" by Sapphire), to redeem the missing elements of plot development and inspirational story-telling that I felt the movie was lacking. 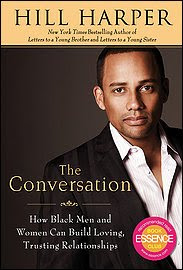 Hill Harper's new book "The Conversation" should be the last book written about black relationships.

It covers all of the topics, the discussions, and the tools needed for readers to move forward in this area, no longer held back by historical, social, and cultural restrictions, perceived or actual.

Released in September of 2009, Harper's third book focuses on "How Black Men and Women can Build Loving, Trusting Relationships" and has the potential to be the definitive word on black love.

Using personal experiences, candid interviews and discussions with his friends and associates, and modern references like the Obamas, the dangers of 'technological' communication, and even Steve Harvey's recent relationship book, Harper presents a relevant and timely discussion on "the breakdown of African-American relationships."
His purpose: to encourage conversation, to present various perspectives, and to encourage black men and women to work towards building a legacy of family and tradition, rather than publicly and personally destroying the bonds between one another.
Some of the enlightening chapters include:


This book is great, because it echoes the current concerns of men and women from a variety of circumstances. While there are universal truths that can be applied to relationships of any race, the historical and specific references to African-American issues is encouraging. Harper understands the issues, and is able to address them directly. As his friend Brad states in the book:
"I think the Black family has been shredded for a couple reasons. The last forty years have been filled with fatherless households and women struggling to take care of their children. As a young girl, if your mother (who probably resents your father for not being there) continuously tells you, "You don't need a man for anything. Provide for yourself! Take care of yourself. Look at me...I'm doing it, and we are fine," at some point, that girl will begin to believe this. Then, that same young girl probably will not have the luxury of seeing her mom have a healthy relationship with a man. So, how is she supposed to know how to interact with men? On the flip side, in these same households, most young Black boys don't have male figures to teach them how to be men or how to treat women. What happens when this young girl and this young boy meet up when they are grown? Exactly what is going on now...you have two people who don't know how to deal with each other..." (pg 57-58)
At the age of 43, Harper's career in the entertainment business has allowed readers to grow and trust the familiar face that has appeared on classic Spike Lee movies "Get on the Bus" (96) and "He Got Game" (98), and as well as other favourites "In Too Deep" (99) and "Lackawanna Blues" (05). His television work has ranged from appearances on Married With Children and The Sopranos to his current role as Dr. Sheldon Hawkes on CSI: NY. 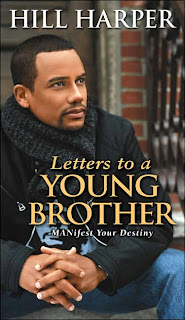 Harper has received recognition from the NAACP Image Awards as "Outstanding Actor in a Drama Series" for CSI: NY in both 2008 and 2009.

His strengths as an actor are numerous, but his academic background and achievements in writing foreshadow the contributions we can expect to see Harper make in popular culture, academia, and maybe even politcs one day.

The son of a psychiatrist (father) and anesthesiologist (mother), Harper has a B.A. from Brown University, a J.D. from Harvard Law School, as well as a Master of Public Adminstration from Harvard's Kennedy School of Government. Just this year, he was awarded an Honorary Doctorate from Westfield State College. 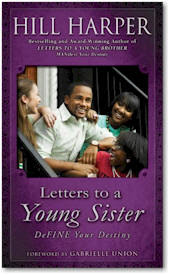 He has a gift for communicating relevant, powerful, and progressive messages through his texts. We can expect to see more of this brother in the future; he is well-equipped and on his way to becoming one of the great black minds of this generation.

Posted by Stacey Marie Robinson at 8:42 PM No comments: