Black male journalists: there are many. Across mediums. Across genres. Across disciplines, and of various generations. But these six in particular have been main sources of news, information, jokes, and entertainment for me for the past year. To say they have fascinated me isn't to say that I agree with all of their perspectives or personas 100%...but this fascination led me to tune in, to YouTube them, Google them, and to stay up-to-date on their musings and declarations.

He is the black man of the hour. The voice of passion, the one tugging at our heart strings, and the winner of the pre- and post-election coverage, as far as I'm concerned. He moved everyone with his tearful "whitelash" statements after Trump was declared the winner of the media war, and he has continued to speak logic, fact, and with a very rare sincerity that is hard to come across on television.

The brother is extremely likable, to say the least. And intelligent. Raw, and trustworthy. He's been around for a while, and was recognized for a great number of things over the past twenty years for his work in environmental and human rights. A Yale-educated attorney, he is an intellect as well as a compassionate soul.

The author of two books, "Rebuild the Dream" (2012), and "The Green Collar Economy" (2008), Van Jones has dedicated his career to advocating for environmental as well as human rights. He is the founder of many non-profit social justice organizations, and has been a leader on clean-energy economics for a good while. He served as a White House policy advisor to President Obama, particularly in the area of "Green Jobs," and has a clean reputation in global leadership and creativity.

And if that wasn't enough, it was also cool to learn that he was the "secret advisor" to Prince, and handled his humanitarian work low-key before his passing. Whatta guy.

A native of Tennessee, many are calling on him to run for President in 2020. My thoughts? I would hate to see this soul damaged by that corrupt political system. I really appreciate his role as a commentator, and expert, and think that his contributions to society have already been great without putting him in the mix of that Washington circus, more than he already is.

I look forward to seeing more great things from this brother, and believe that public expectation for him has increased exponentially, as a result of his outstanding political coverage during this year's election news cycle.

As a self-professed TMZ addict, I am naturally drawn to the one black voice of racial balance, knowledge, and intellectual comic relief on the program. I watch TMZ to catch up on my celebrity news...but I stick around for Van's perspectives and insights. I love that show because despite all the celebrity fanfare and interaction...everyone in the office seems like an average employee, annoyed at their boss, rolling their eyes, and just tolerating another day at the job. Van represents that dude at work that makes it worth waking up and sitting in traffic every morning. The one guy that has all the witty commentaries. The one who you look forward to running your theories and ideals by because you know he'll have great feedback, and thoughtful contributions. He's the guy that when everyone is obnoxious and self-righteous, can hit you with one well crafted sentence that just quiets the room. There's a very, very appealing intellect about this brother that is hard to ignore. It makes an otherwise "trivial" television program all the more interesting to tune into once (or twice) a day...don't judge me.

What else do I know about Van? Absolutely nothing. It is near impossible to find any biographical information about him online...but I still attempt to uncover more news and insights into this journalist. And the next time I'm in L.A. I'm for sure getting on that TMZ Tour bus, and hoping for the best.

Aside from an unhealthy TMZ obsession, where else can a girl look to stay up to date on her pop culture news? THE BREAKFAST CLUB, of course. The Power 105.1 interviews by Charlemagne, Angela Yee, and DJ Envy give me life. They are THE source of interesting hip hop news, to say the least. I love what it has become...a go-to source, for many.

Charlemagne used to be the hardest brother on earth to stomach. He was obnoxious, and loud, and a know-it-all. He was offensive, and uncomfortable, and a bully at times. I couldn't look at his face, read his Tweets or anything...

And then one day, the brother became extremely likable. And I actually appreciated his perspectives. He was suddenly refreshing! I'm not sure how or why the change happened, but I actually followed his social media accounts, started watching his interviews regularly, and he became one of my new sources that I enjoyed catching up with.

We don't get MTV2 up here in Toronto with our cable, so I haven't tuned in to Guy Code, or Uncommon Sense, or any of the many other programs that he is responsible for. But I have to commend this guy for his hustle. He's everywhere. As both a radio and television personality, Charlemagne has become one of our generation's go-to guys, and I'm no longer mad at that.

A South Carolina native, he used to work with unbearably-unbearable gossip queen Wendy Williams...but now has nestled comfortably on the New York radio station in a role that I think suits him well.

I appreciate that he doesn't hold back. Sometimes it's awkward as hell, but at least you know what you're getting when it comes to him. He's the kind of guy that if he was your friend, he would keep it all the way real with you. As much as I don't like everything that he says, at least you can trust that he is speaking his mind and definitely not faking the funk. His candor, and his opinionated nature is refreshing.

What a breath of fresh air this guy is, too. So ridiculously witty and charming and interesting to watch. I spent a few hours YouTube-ing some of his stand up specials, and was pleasantly surprised at how much I enjoyed them. And laughed! He has such interesting perspectives. I don't watch his television program every night, but I do catch the highlights when they circulate and always vow to make it a regular part of my schedule.

He's brilliant, and I think he was a great successor to Jon Stewart last year on The Daily Show. In fact, the more I get to know about him, the more brilliant I think he is.

Born in South Africa, he was a soap star and radio personality there, before coming to America a few years back to pursue his career in stand up comedy. A few specials later, he became a great source of racial humour, political commentary, and all around cleverness as far as I'm concerned.

Also a young boy, at 32, I think he has an amazing career ahead of him. I have yet to catch up on all his wonderfulness, but think that he is an intelligent brother (who happens to speak over 6 languages, including Zulu, Afrikaans, and German...) and that the media is a better place because of him. 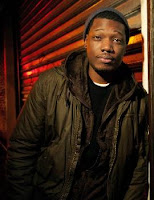 Can we call him a journalist, based on his Saturday Night Live "Weekend Update" alone? Why not! I know he is a comedian by trade, but I have come to know him as a reporter for one of my favourite television shows, and look forward to the interludes he has each week on SNL with Colin Jost. Even if the rest of the episode is wack (and lately the show has been totally on point!), I know that I can always look forward to the Weekend Update for a couple of jokes and insights.

He starter there as a writer for SNL, which automatically gives him credibility in my eyes...because the show just got super "lit" around the time when he and a few others came on board. I also love that he was a correspondent for Jon Stewart (one of the white male journalists that fascinate me) on The Daily Show. He has the perfect mix of political satire, urban humour, and common-sense logic that I love.

He's only 33 years old, but he's definitely someone that I think it's about to get an even bigger come-up on the scene soon. I anticipate watching his career grow, and know that with his wit and hilarity, it will only produce great things.

Next step: I hear that I need to check out his Netflix stand up special...I look forward to seeing him in his natural element, and hearing what goes on in his mind...unfiltered.

I literally started Tweeting CNN to get this guy off the air, a few years back. In the midst of the riots in Ferguson, Missouri, extreme racial tensions, and sensitive media coverage, I was livid. His reporting was corny, insensitive, and ridiculous. I called this guy a claffy, and every degrading name on the book...publicly, which is something I normally wouldn't dare do. But Don Lemon irked me, beyond. He was cocky and out of touch with reality. He was guilty of making numerous comments against blacks, and janky reporting advice like "pull up your saggy pants, black guys" in years past. He was an elite jerk, and I couldn't stand him. I hated having to look at his face during my CNN-addiction phase. I resented him.

Buuuuuut somewhere along the line...I warmed up to him. I saw him begin to mature in his blackness, and his perspectives became less aggravating. He suddenly became a voice. He suddenly began to "get it" and he didn't make me want to change the channel on sight. Don Lemon grew into his role as a journalist, and became tolerable to me. Almost endearing.

That's not to say that I agree with his approach, his opinions, or his demeanour all the time. It's also not to say that I think he's the greatest "black male journalist" out there. But, I do rate him for improving, and for really, really trying to be influential and groundbreaking. He has a prime time spot on CNN, and as much as people knock the station and its messages...it is an extremely influential spot to be in.

He's 50 years old, a Louisiana native, with a degree in broadcast journalism from LSU. He's been with CNN for about ten years now, and also worked with NBC early in his career. Will I read his autobiography "Transparent"? Probably not. Will I continue to watch him on CNN...definitely. While he may never be my #1 source for information, I do give him credit for being a constant source of television news, and for trying desperately to wrangle his unruly guests for a couple of hours each evening.


Posted by Stacey Marie Robinson at 11:57 AM No comments: