I can't lie...I automatically felt like he was pulling a fast one. Putting out a CD with no cover art, no labels, no track listing, and no nothing...but a price tag and a lyrical warning label. Then I was annoyed with that big piece of orange tape at the side that is now ripped and sticky and gross, and makes my brand new blank case look old like something from 1995. Then I listened to the first track and was like...WTF?

First thoughts: is Kanye trying to prove something? That we'll still buy his album with no promotion, and have it sound like GARBAGE and still have it hit the charts? Arrogant. Over the top.

And then I realized that I had done just that. I had bought the album just because it existed, and because I'm a Kanye fan. And that even though the first few tracks sounded like hot noise, that I would still play the disc on repeat for the next week or so until I fully tried to understand his artistic genius.


This is clearly why Kanye is Kanye. Because he can be. He can be a jerk. He can autotune. He can wear skirts. Hell, he can even impregnate Kim Kardashian...and he'll still be one of the dopest rappers ever.

Now I love Kanye, but I'm still trying to find the groove with this one. I love love LOVED "My Beautiful Dark Twisted Fantasy" back in 2010 (as per my review). I LOOOOVED 2008's "808s and Heartbreak," and I also thoroughly enjoyed the 2011 collaboration with Jay-Z for "Watch the Throne." I like everything about this dude, including the fact that he's eccentric as hell...but it gives him character.

I can sense his passion. His desperation. His creativity. His confidence. His insecurity. There is something about Kanye's soul that I really really dig. Regardless.

The album...not so much. I mean, don't get me wrong. I'll listen to it UNTIL I like it, or at least tolerate it. Or worst case scenario, I'll put in on the shelf with countless others that never make the heavy-rotation of my car, and just wait until the music videos come along and make the singles a little easier to tolerate.

I listen to new albums (when I do actually purchase them, which is for a rare FEW artists)...in phases. First off, I do the general scan through and overview. Then I find my favourites, and play them on a repeat a few times to really get into the vibe of it. Surprisingly, the songs I usually love in the beginning, are usually not the same ones I love in the end after I've given the album a listen for a week or so.

Then I take it to a lyrical level, and try to hear what the artist is saying. And yes, this comes AFTER the musical level, because if I don't feel the musical element, I won't even bother with the lyrical one. After listening to the words, I try to internalize the artistic vision, and the bigger picture. What does the album represent for this artist. What are they trying to say? Is it effective?

With some artists, this can all take place very quickly. With others, it takes weeks for me to really understand wha gwan. With this particular album, I don't know if it will ever happen.

It's just weird. No matter how many times I listen to the first few tracks, I just find it creepy, scary, and downright odd. I love the reggae samples, and hearing Capleton's voice on a Kanye album was cool, but hearing it mixed in with the eerie rhythms and screams in "I Am A God"...not so cool. Loved hearing Beenie Man's voice, and other odes to Jamaicans, but in the context, it doesn't do the artists much justice other than bragging rights. 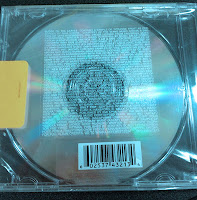 What can I say? I want to be able to glow about this album, but I really have to chalk this one up to a Kanye experiment gone terribly wrong. Kanye's all into fashion now, and Europe, and he's in love, and expanding his horizons and apparently feeling himself right now...but I just hope that the next album has something with some melodies, a little beat you can dance to, and a little bit more life. This one reeks of gloom and horror, although I don't think that was his intention.

I do enjoy Track 10, which after some quick internet research (so inconvenient to not have it right there), I learned was called "Bound 2." Something really catchy about that one. And Track 4 "New Slaves" is all right in a classic Kanye kinda way. All the rest are just a blur or hard instruments and scattered phrases.

I'll give it another week. After that, it's either I have a revelation of his continued genius and bump it for the rest of the summer...OR I use this convenient blank case to store another CD that I actually don't want to get damaged, and put ol' Yeezus on the shelf to mix in with the other label-less discs that may never hit my airwaves again.